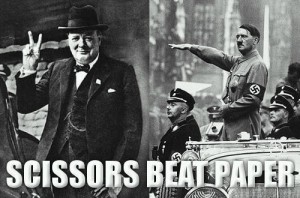 Obotski Logic: These Guys Are The Same Because They Both Have Hands

I have said before that Birtherism provides a great basis to understand more important political issues, and a good starting point to study the thinking and lack of thinking inherent in partisan politics. Today, the Obotski provide a wonderful example of Logical Epic Fail and the resultant KERPLOP!!!

YOU FELL FOR IT!! YOU PRINTED A SELECTION FROM ADOLPH HITLER’S MEIN KAMPF!!

Jeez, Orly. I thought you were Jewish. I thought maybe you’d disapprove of something written by Adolph Hitler. But I guess not, huh?

See, if you remove the first and last sentences of my comment, you’ll find that the rest is a direct quote of Adolf Hitler from Mein Kampf, except I substituted the word “Usurper” for the word “Jew”.

AND YOU PUBLISHED IT, UNLIKE ALL THE THINGS YOU DON’T LIKE THAT YOU CENSOR ON YOUR BLOG.

“Thomas Frankbuerpher” of course, is a play on the word “birfer,” which we use to describe birthers. And the initials T.F.B. in “Thomas FrankBuerpher” also stand for The FogBow. We rule, and birthers drool.

Smile and say “cheese” as I take a screenshot of you posting Nazi propaganda on your blog, Orly! Look for it on The Fogbow!

Here is the selection from Mein Kampf. Just substitute Usurper for Jew and you will get the general idea, or read the link above:

If the Marxist teaching were to be accepted as the foundation of the universe, it would lead to the disappearance of all order that is conceivable to the human mind: And thus the adoption of such a law would provoke chaos in the structure of the greatest organism that we know, with the result that the inhabitants of this earthly planet would finally disappear. (4)

If, with the help of his Marxist creed, the Jew is victorious over the other peoples of the world, his crown will be the funeral wreath of humanity and this planet will, as it did thousands of years ago, move through the ether devoid of men.

Hence today I believe that I am acting in accordance with the will of the Almighty Creator: by defending myself against the Jew, I am fighting for the work of the Lord [p. 60].

But this is where you can get a real deep look into the faulty mental functioning of the typical Obot. You really can’t take sentences from a book written by a bad person, substitute a noun or two, and then dance when somebody bites. The technique fails at the most basic logical level. Maybe even at a deeper level of not understanding the interplay between nouns and verbs and objects in sentences.

Can you really just substitute nouns and actually believe you have PWNED someone??? (Pwned means “to be controlled against your will”, or “to be defeated by a superior power”. It can be pronounced as “owned” or as “poned”, with both pronunciations being correct. In some cases, you will even hear it pronounced as “pawned”. )

Let’s see: For example, suppose Hitler said, “The Jew is bad and must be eliminated.” Can we substitute another noun, like Hunger, and get the same result??? “Hunger is bad and must be eliminated.” No, that one didn’t work. Let’s try it in reverse. “See Spot run! Run, Spot, run!” Does that inherent innocence carry through to “See the Jew run! Run, Jew, run!” Well, I don’t think so. But, by OBOTSKI Logic, it would be acceptable since it came from a good source.

Gee. Come to think of it, that is why we call them OBOTS.

I am a Girl Reporter on the Internet. I am 36 Plus I am a INTP. I have a Major in Human Kinetics, and a Minor in English. Squeeky Fromm, Girl Reporter END_OF_DOCUMENT_TOKEN_TO_BE_REPLACED
This entry was posted on Saturday, May 28th, 2011 at 12:29 pm and posted in Pre-Long Form Birtherism. You can follow any responses to this entry through the RSS 2.0 feed.
« Obotski Kaa Kaa – Just Trust The Government!!! (Lies the Obotski Taught Us, No. 2)
A Sonnet For Romantic Obotski – I Am Thy Fool »