The Herculean Labors (Or, Wrassling The Cretin Bull, And Cleaning Up Behind Him)

The Birthers Got Carried Away By The Cretin Bull

Well, the software is telling me that this is the 200th post at The Birther Think Tank. So perhaps is time to step back and reflect on the Big Picture nature of the Anti-Birther vs. Birther Struggle.  There are analogies to be found in two of the mythological Labors of Hercules, specifically the 5th and 7th Labors.

The Fifth Labor of Hercules was to clean the Augean Stables. Thousands of cows lived in these stables belonging to King Augeus. They had not been cleaned in 30 years, but Hercules was told to clean them completely in a single day. To do so he made two rivers bend so that they flowed into the stables, sweeping out the filth. ( from Infoplease)

The Seventh Labor of Hercules was to capture the Cretan Bull. This savage bull, kept by King Minos of Crete, was said to be insane and breathe fire. Hercules wrestled the mad beast to the ground and brought it back to King Eurystheus. Unfortunately, the king set it free, and it roamed Greece, causing terror wherever it went. (from Infoplease) 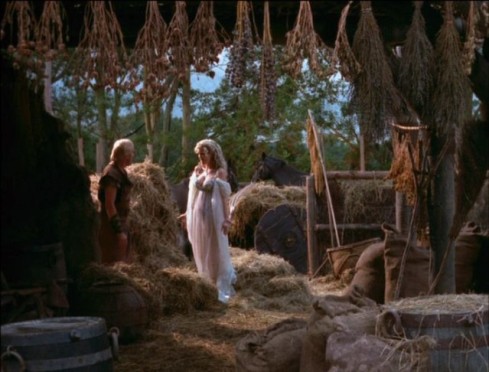 There Was Money To Be Made From Manure

Those two myths pretty much cover the life of the Anti-Birther. Our battle is defined by the other side. The Birthers create the bullsh*t, and  we must clean it up. It is a never-ending task because the bull-sh*tters are constantly pumping out new product on a regular basis. Unike Hercules, we can not divert any rivers (due to the lack of a Corps of Engineers’ permit) to short cut the job. No, we must shovel it up the old fashioned way, one scoop at a time into the Wheelbarrel of Truth, and roll it out to the Compost Pile of Birther Dreams.

Making the job more difficult is the fact that some people make money off the bullsh*t. Television provides a most appropriate illustration of  this fact. The Image directly above is from the TV series, Hercules, The Legendary Journeys, the Reign of Terror episode. In that episode Salmoneus, the somewhat shady promoter character, travelled with Hercules to visit the Augean Stables. He concocted a plan to sell manure from the stables with Hercules’ celebrity endorsement. (“Reign of Terror“).

Here you should be thinking Jerome “Jerry” Corsi, World Net Daily, Cold Case Posse Deputy Michael Zullo, and a host of other Birthers who profit, one way or another, from promoting the nonsense. It is my opinion that many Birthers are also in it for the attention, such as CDR Kerchner, Mario “The Mangler” Apuzzo, and the late “Leo Donofrio, Esq.” These people are not so stupid that they could seriously believe the two-citizen parents Imaginary Law. But, some people are. 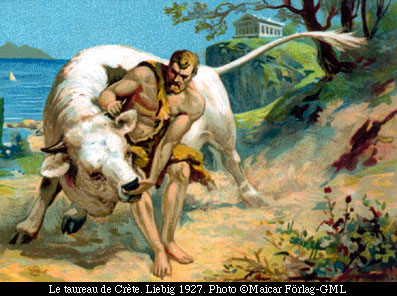 Hercules Could Just Swear He Had Encountered This Bull Before

Daily, we Anti-Birthers wrassle with the insane Cretin Bull and no matter how many times we pin its shoulders to the ground, it just gets loose to cause more terror and distress. Old, discredited rumors persistently find resurrection in the Birther Blogosphere and resurface.  Most recently, Postman Allen Hulton has resurrected the Obama As A Foreign Student myth, based on 20+ year old hearsay conversations.  This Who Was He??? identity trope is also mirrored in the Hercules myth. There was uncertainty as to the identity of the Cretan Bull.

The Cretan bull, was said to be the father of the Minotaur by Pasiphae, wife of the Cretan king Minos. By one account, the Cretan bull was the beast that had carried Europa from Phoenicia to Crete for Zeus. In other myths, the bull was sent by Poseidon to Minos,to be sacrificed following the king’s promise that he would sacrifice to the god anything that rose from the sea. But Minos, struck by the animal’s beauty, sacrificed in its place another bull, thus provoking the god’s rage. The sea god then in revenge drove the animal wild, ravaging the crops and orchards of Crete.

Hercules captured the beast after a lengthy struggle. He brought it all the way back across the sea to Tiryns, to present it to Eurystheus. He then set the beast free. It then roamed around Laconia and Arcadia, crossed the Corinth Isthmus and ended up in Marathon, to be later captured and killed by Theseus.

In fact, the first image here is Europa Carried Away By The Cretan Bull by Noël-Nicolas Coypel, 1726-1727. In a way, America has been carried away by the Birthers’ Cretin Bull.  A Cretan is, of course, someone from the island of Crete. A cretin, on the other hand,  is a person of subnormal intelligence. In the past that term, and others, were associated with specific I.Q. levels. There is some disagreement about the levels, but this seems representative:

What we must deal with daily are cretinous, moronic, imbecilic and idiotic arguments. Even Birther Mensa members like Sam Sewell of The Steady Drip blog sally forth into the two citizen parents argument despite repeated court losses on that point. Ex-military officers like CDR Kerchner and Walter “Citizen’s Arrest” Fitzpatrick spew forth Vattel like gargoyles on the Notre Dame Cathredal during a cloudburst. Jerome “Jerry” Corsi, who has a Ph.D from Harvard, carries on like a madman biting on every piece of worthless evidence like a Great White Shark chomping down on a surfboard – swallowing it now, and letting the other end worry about the consequences.

So why do we do it??? I can’t answer for other people. Personally, I don’t even think we are winning the battle.  Birther Blogs seem to be springing up everywhere, and the stupidity knows no shame. Or limits. The courts throw the Birther Junk out, but they would do that whether we were here or not. Obama is still on the ballot in every state, but I am not even an Obama supporter. I’ll probably vote for the Republican, or if he is too nutty, just stay home.  And it is not like any ex-Birthers have ever told me, ‘Thank you, Squeeky! You have convinced me I was wrong about this Birther stuff.” That has never happened.

I think that me, and probably the other Anti-Birthers and Obots, too, just can’t stand to let these idiotic lies go unchallenged. Like that other Hercules, the French one, Hercule-Savinien-De Cyrano de Bergerac said:

CYRANO:
What say you? It is useless? Ay, I know
But who fights ever hoping for success?
I fought for lost cause, and for fruitless quest!
You there, who are you!–You are thousands!
Ah!
I know you now, old enemies of mine!
Falsehood!

(He strikes in air with his sword):

Have at you! Ha! and Compromise!
Prejudice, Treachery!. . .

Surrender, I?
Parley? No, never! You too, Folly,–you?
I know that you will lay me low at last;
Let be! Yet I fall fighting, fighting still!

(He makes passes in the air, and stops, breathless):

You strip from me the laurel and the rose!
Take all! Despite you there is yet one thing
I hold against you all, and when, to-night,
I enter Christ’s fair courts, and, lowly bowed,
Sweep with doffed casque the heavens’ threshold blue,
One thing is left, that, void of stain or smutch,
I bear away despite you.

(He springs forward, his sword raised; it falls from his hand; he staggers,
falls back into the arms of Le Bret and Ragueneau.)

CYRANO (opening his eyes, recognizing her, and smiling):