A Black Night For Team Arpaio??? 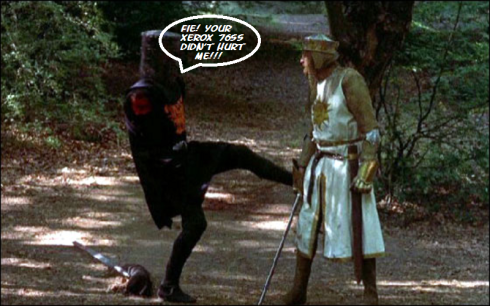 He Must Have Gotten Some Strange Kicks From Denial???

Team Arpaio and the Cold Case Posse aren’t exactly having the best of times lately.  They can’t get a real, live prosecutor interested in their silly report that concludes Obama’s online image of his long form birth certificate is a forgery.  After a year and half, they can’t even release the report to the public for fear of ridicule.  On a good day, Republican congressmen merely ignore them. On most days, which are not good days, the congressmen cancel out meetings with them as soon as they find out what kind of idiot with whom they accidentally scheduled a meeting. Nightly, they pray for Alzheimers to strike Republican leaders so they will finally find someone to agree with them.

Human beings are proving a huge obstacle, and now, the mean old Obots, particularly the blogger, NBC,  have gone and made things worse by uncovering the source of the online birth certificate anomalies – – -A Xerox Workcentre machine which does all the strange and weird things that so discomfort the Birthers.  RC, of the RC Radio Blog, has many articles up on this issue, including a hilarious video:

There are several more articles at the link which explain in simple terms how the online anomalies occurred. It looks convincing to me! The Obots have not been silent about their discovery! After sneaking their way onto Gallups’ radio show, the cat is out of the bag in the Birther world. Finally, Carl Gallups and Mike Zullo had to address the issues about the Xerox 7655. Sooo, how did they handle it???

Deputy Mike “The Arizona Kid” Zullo recently appeared on Gallups radio show, and here is a transcript of their remarks, from the first part of the show:

Gallups: What’s your response to these Obots?

(3:54)  Mike Zullo: I think they’re delusional. I think they’re deluded that they are some vessel of authority somewhere. I don’t know in what stratosphere.  But I don’t owe them anything. I have never engaged them in two years. I don’t really pay a lot of attention to them. And what little I do know of them, aside from the identities of a few, and one that I am intently focused on now. It really just seems to me to be nothing more than a big disinformation campaign. It goes beyond even misinformation. It is disinformation. And for a definition, it’s false information that is deliberately, and a lot of times covertly spread, in order to influence public opinion, or to obscure the truth. And that to me, is about what it is, so to even deal with them as far as I’m concerned is brain damage. I don’t see any reason to do it.

They went on to discuss the Xerox Workcentre and characterized it as not relevant to the investigation, and stated that the investigation had moved well beyond that point. Which only casts more suspicions on the underlying Cold Case Posse report. If it is that great, why is it still secret after a year and a half? Why don’t any prosecutors seem interested in it? Why is it that Deputy Zullo has to go to Washington D.C. and beg the VIPs and congressman to do something about it? Why does he keep getting rejected?

If Deputy Zullo has any legitimate questions why this is happening, perhaps he needs to do something he has refused to do for two years- and engage with the Obots and anti-Birthers.